Wetherspoons, bitten by the hand it feeds

Sometimes, something happens that demonstrates so well what you'd struggle to convince anyone would happen until it happens. And here it is.

So simple, yet beautiful and tragic at the same time. Of course, anyone actually interested in the news and what's happening in the UK currently (and the US) would spot instantly that a company run by one of Britain's most outspoken Brexiteers would be most unlikely to make such a statement around poppies. It's also bleedin' obvious that not many Muslims (the usual target of anti-multiculturalism commentators) ever visit a Wethie's for a pint and a full English.

But that didn't stop Britain's army of anti-social commentators delivering hate by the pint at Wetherspoon's and its Brexit-batty owner Tim Martin. 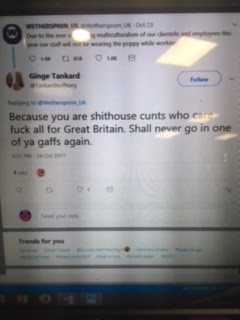 Which is funny because it's the exact audience that's turned on Martin that he went after with all his matey petty nationalist Brexit nonsense, along with Britain First, Murdoch, the Daily Mail, Express, Sun, Gove, Johnson, Farage and a whole host of other horribles that you wouldn't want to drink next to. 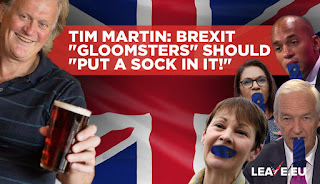 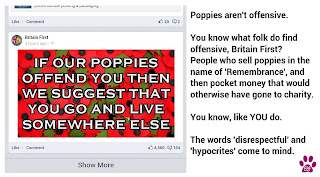 Because the truth is that apart from a few nutcases, no-one finds the poppy offensive; what is offensive is using the poppy to generate hate and being gullible enough to be sucked in by this nonsense.

Thousands of Muslims died in the two World Wars, some Muslim associations sell poppies. Yet even when we've got past this latest 'poppygate' we'll be into the Mail/Express/Sun telling us people 'somewhere' are being forced to say 'Winterval' or 'holiday' instead of 'Christmas', or 'We can't have Christmas decorations/nativity plays because they offend Muslims'. The latter always confuses as to how people are taken in by this as the UK is literally dripping with Christmas lights and other paraphernalia, and people complaining that Christmas has come too soon.

So congratulations to spoof site @Wetherspoon_UK. A tiny step to demonstrating to the UK how it's been shafted on Brexit by some of Britain's greatest manipulators. 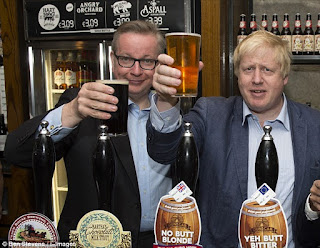 Oh yes, £350m for a pint anyone? Before Turkey joins the EU. All our beers are made in Brussels, and so on.We can sort Brexit over a nice pint of beer. Watch your pockets though...