A guide to eating curry in the most satisfying manner 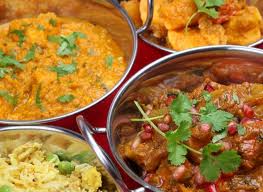 We hear so often that food in the UK compares with that in France, or even beat it. As a regular visitor to France I know that this is tosh, with one exception: curry houses. On every high street (and some other streets), in every town in France you'll find independent restaurants serving incredible food with three and four course menus from 20 - 40 Euros. I write 'Euros' as I think UKIP has broken in and stolen the Euro key from my laptop, I can't find a Euro sign on it.

In the UK the main equivalents are chains like Zizzi, Pizza bloody Hut, Pizza bloody Express, Ask, Bella bloody Italia, Strada, etc. The only difference between these is the excitement as you present your 1 for 2 voucher, wondering if it'll be accepted on the third Wednesday of the month. In Calais alone, the nearest French town to the UK, you have Le Channel, Histoire Ancienne, Cafe de Paris and Au Coq d'Or, within 100 yards of each other - they are all superb, particularly Le Channel. 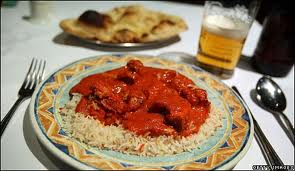 I'm around 50 and during my lifetime a revolution took place (ok, revolution is a bit of an overstatement when applied to restaurants but you get my drift). In the late 60s and early 70s the Chinese were arriving from Hong Kong, setting up their take-aways and restaurants.  People used to 'go out for a curry' to a Chinese; you can still get a curry in a Chinese now but not many people do. We did respond with the cult of the 'Bake 'n' Take', a sort of non-fish-and-chip English take-away whose main dish was baked potato...

And then the curry houses arrived. There were a few even since the 30s and possibly before because of our links (domination) with India but an explosion began in the 70s, which turned atomic in the 80s and 90s. Atomic in numbers as well as the heat of the curry where rugby players would order a phal, basically chillis and broken glass, to prove their virility with a stomach ulcer, ruptured bowel and bleeding anus. It has become part of British culture, demonstrated so well by the 'Going out for an English' sketch in Asian sketch show Goodness Gracious Me.

The curry houses brought with them even more exciting flavours than the Chinese, the cult of the poppadum and that minty yoghurt sauce we all lap up. Previously, anyone offering mint yoghurt in the UK would have ended up in Broadmoor. The curry houses also brought with them an astonishing level of sophistication at a very low price: beautifully presented restaurants, crisp white tablecloths (speckled and wrecked after the first poppadum) and attentive staff. Towns like Bradford started promoting curry weekends, such was the richness of their curry offering; I went six times! I might not have ever visited Bradford but for this phenomenon, which would have been a shame.

Astonishingly, in the 80s, the trade magazine, Tandoori, began criticising the industry for its lack of quality. Then a revolution really did begin. It was as though the magazine's editor had only ever dined at The Savoy and had not set foot inside a curry house. The industry and its customers let him know and he paid for his ludicrous statements by spending more time with his family.

The industry continues to develop. Now mainly run by Pakistanis and Bangladeshis, there's a move to Nepalese cuisine that is taking off. But there is a code to eating curry and I will attempt to outline it here.

Well, there you have it. If you can think of any more, or disagree, I would be delighted to discuss. By the way, my favourite venue currently is The Jalsha, Sidcup. The link is to Trip Advisor, despite the owner and head waiter being superb gentlemen they do not appear to have entered the modern internet age with a website. The photo on Trip Advisor looks appalling, ignore that, the food is excellent, as is the Sunday lunch time deal - and Elvis nights!

The mystery of prostitution

I was thinking of doing something on this for my next stand-up. There's nothing funny about sex-trafficking or women so desperate that they need to go on the game. But the men who indulge? I did know of one very senior chap once who did and it gave me a huge feeling of superiority over him knowing that after espousing moral values for his people in the workplace by day, he was hanging about the streets of north London, doing another type of 'business', by night. This made him into a figure of fun rather than a smooth, MBAd top exec.

What wasn't so funny was losing a client (a Finnish company) whose board not only jointly indulged but presented the receipts so that the venture capitalist, after an audit, withdrew all its funds making the UK employees redundant and losing a client for my business...

Anyway, the point is: would you? I wouldn't, even if I were single. I'm not morally opposed to prostitution but look at it this way: these women get a lot of practice. I would pay my money to carry out a task that they are way more professional at than me; it would be like me trying to show Michael Schumacher how to drive. It would be supremely humiliating, and at some considerable cost.

I have encountered prostitutes on a number of occasions. Once was with my daughters when they were about 10 and 7. We were walking around Amsterdam and of course we came across the area with the ladies in the windows. I thought we had better move on quickly but the girls were fascinated. "What are they doing?" they asked. "Selling kisses," I said (I am still proud of that answer). "They're beautiful, like Barbies!" said the girls, who demanded to walk down that street every day for the next three days, waving at the ladies. I gave in; they're 17 & 19 now and neither has set their sights on an apprenticeship 'on the game'; I expect the Government would withdraw the course the day they signed up anyway. 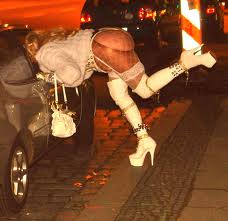 I worked in Soho for years and got the impression that you could do more naughty things on the back of a bus in Lyme Regis than the previously mean streets of W1; its heyday was long gone. However, I was approached by ladies of the night (and day) on three occasions, maybe I looked like I really needed a 'quick shag'.

On the first occasion I was approached by a very smartly dressed woman with a briefcase, the type of person I would normally expect to see at a conference on 'Mobile Applications for the 2020s' who asked: "Do you want sex?" That doesn't normally happen to me so I clearly looked startled. I eventually worked that there would be cash involved. I struggled a "No thanks," and she said: "Do you want boys?" That was a shocker, did I look like I wanted boys? Should I dress differently to avoid this confusion? Actually she offered me sex with her first (I presume) so I comforted myself that she was just covering all bases. "Only to clean my car," I said.

The second was merely an offer of 'business' in Brewer Street. Usually it was much harder to get clients than that, it involved pitches, research and Powerpoint, so I knew she wasn't offering me a PR contract. I was an old hand now so I simply refused.

The third was was outside Charing Cross station, about a mile from Soho. A middle-aged lady asked me if I could light her cigarette, presenting me with a box of Swan Vestas matches. I wondered why she couldn't light it herself but I had consumed about eight pints of Doombar, so I had a go at lighting her up, so to speak. As I did so, even through the alcohol, I felt her sliding her leg up my inner thigh. I said "I'll never get it lit if you do that," and carried on trying to light it. It was windy so I was on about the fifth match when she suggested we do the pyrotechnics back at her place. I began to realise at last what her game was and gave her back the matches, saying that in my condition "it would not present good value for money." We parted as friends.