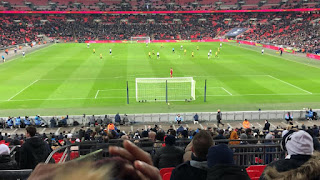 Last night I was asked to accompany a friend to Wembley to see his beloved Spurs, at Wembley as their house isn’t ready yet. I’ve been lucky enough to visit many grounds across the UK, but all of them feature ‘football fans’. Last night’s special subject amongst Spurs fans holding court over various sections was ‘Fernando Llorente and his contribution to Tottenham Hotspur’. It wouldn’t have taken Stephen Hawking to work out that Fernando was unpopular. He was described for 80 minutes as “useless” and a “c*nt”. Some of the more mathematically gifted worked out and argued over how much he was being paid per minute to besmirch the lily-white shirt with his Spanish body. Derision was also aimed at Spurs’ manager, who apparently had ‘no balls’, when there were two substitutions yet Fernie was left on.
And then he scored.
I’m not saying that football fans are fickle but the calculators were put away and every positive thing the heroic Fernando had ever achieved for Spurs was recounted lovingly. He could have married their daughters, and whilst waiting for the wedding he would have been invited round for Sunday afternoon intercourse with their wives whilst the husbands looked on and admired his technique.
And then poor old Fernando needed a rest. He knew that after he’d scored he could go down if a Watford player so much as gave him a sideways glance, and then stay there whilst waiting to be tucked up in a duvet by Spurs fans now concerned about what his ‘work rate’ had done to his geriatric 33-year old body. Contrast this with the reaction of the Spurs faithful who had demanded throughout that Watford’s keeper, Ben Foster, be executed for time-wasting each and every moment he got the ball.
The other observation is about fans of the same team fighting amongst themselves. In football crowds things are said that couldn’t be said elsewhere. They are not always ‘politically correct’ and thankfully most of outright racist comments have disappeared. And some of the things said are very funny.
But an incident I saw last night was funny in its abject hypocrisy. A man of about 70 stood up and laid into another, younger man. “Don’t you f*cking swear in front of my son!” he screamed. “You can f*ck off to another seat if you want to f*cking swear you c*nt!” The son looked on bemused; he was about 45, and looked as though he’d like a good swear himself. Eventually the stewards intervened and settled them down. But then it all erupted again and the protective, sweary father and sensitive son decided they would move to two of the other 70,000 seats available in the stadium.
The only other crowds I’ve been in that are as amusing as this are at the ballet, and possibly the rugby where you can drink with abandon and trade insults with opposing fans who won’t try to murder you in return. At baseball you can sleep and eat your own weight in burgers as the ‘sport’ is as dull as the audience. At cricket you can also get a*seholed but as it goes on for so bloody long you can leave and visit an art gallery during a game and not miss anything so drinking yourself into oblivion won’t waste any money spent on the ticket.
Who wants to take me to another game?

Posted by David Eckhoff at 06:18 No comments: