The further decline of Southeastern Railways 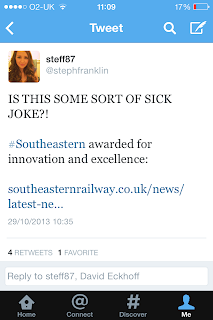 Southeastern: no surprise - and then a big surprise

Our favourite railway operator continues to leave thousands stranded through engineering works; short, cancelled and delayed services - and then surprises us with an award for 'excellence'!

(Note: this was written before the 'Great storm of St Jude'. Whilst the twigs, leaves and branches on the track did have to be removed, there was no excuse for telling people there were no trains when there were and there were trains when there weren't. But that's what happened to passengers for years, storm or not, so it hardly seems worth writing about. I'd rather cover other every-day nonsense.)

Southeastern Railways didn't surprise us in the week of 21-25 October 2013 with a collapse in service usually only brought about by the mention of light snow. Passengers paying fares that make them cry tears of blood whilst being ignored or provoked by Southeastern were left on platforms or stranded on trains, either forgotten or fed ludicrously inaccurate information.

﻿
Along with the rest of you, I was subjected to the 'full house' of this demon revenue-collecting machine's arsenal of malicious incompetence on the Monday morning. I arrived at my station to find a fairly normal setting: it was shabby and the PA system was turned down so low passengers had to press their ears against the poles holding the loudspeakers to hear anything.

This 'Southeastern morning' went from bad to normal with a cancelled train, a short-formed train, a very, very late train, a stranded train with no information given to passengers at all (then stunningly incorrect information) and an arrival so late that some people considered attempting the return journey immediately in order to be home in time for Coronation Street.


Despite us paying it to manage suppliers Southeastern immediately named Network Rail (we were told by Mr Major when he split up the railways that 'blame-offsetting' would not be allowed) as the culprit as if it were another Yewtree suspect. It is likely that blame, on this occasion, was with Notwork Fail as both businesses are examples of UK railway culture, where moving passengers around is not exactly top of mind. But we don't want to know who is to blame Southeastern: you're one the worst examples of monopoly exploitation in the UK. We want you to do all the things you, and your predecessors, said you'd do in return for draining passengers' wallets like a Watchdog Rogue Trader - at fares fair to us, not your 'senior' people. It's also clear that you have no idea where your trains are and you don't tell your staff anything, not that they're that willing to pass it on anyway.

My suspicion is that board bonuses are mainly triggered by revenue and cost-cutting targets (I asked Southeastern to share how board bonuses work but it's not transparent on this matter and didn't even respond, after three times of asking), rather than anything that would benefit passengers. Until this situation is resolved services will continue to be a metaphor for a three legged donkey drawing a cart with only one wheel, whilst the owner explores the possibility of withdrawing another wheel, and the donkey.

Also, I'd like to know how much of the compensation from Network Rail to Southeastern will find its way to passengers through Delay Repay and how much will be kept back...

Something to warm the cockles of passengers' hearts and take our minds off not being able to get to and from work using our platinum-priced tickets was Southeastern's surprise announcement that it had won a range of awards for innovation and excellence in something called the 'National Railway Awards'.

If you can believe it, here is the list of Southeastern's awards:
There was a certain (huge) amount of incredulity from the people who actually pay to use Southeastern (and weren't asked for their opinion) but I would urge you not to be so cynical; most industry awards are as good an indicator to quality of service as Stuart Hall's denials of wrongdoing were to his actual guilt.

Perhaps the most most frightening thing was this statement, by Southeastern: "Southeastern’s engineering wiki is thought to be so impressive, other industries such as aviation are looking to copy and follow suit." I will not be travelling by plane again until the aviation industry confirms that this is a "B*llocks PR statement made by an organisation that shouldn't be left in charge of a keyboard." And when someone tells what an 'engineering wiki' is.

One of the signs that all is not what it seems in the achievement of excellence is the fact that so many peak-time time trains, those that aren't cancelled, now comprise eight, six or even fewer carriages. Only two stops after these trains leave the originating station, people can't get on them. It is the same for most of the people on the line as if the trains were cancelled. Have a look here at the effect of a short train.

The great thing about this for Southeastern is that this trick, unless I'm very much mistaken, doesn't count against performance figures, which no passenger believes anyway. Southeastern says on twitter to people stranded by this situation or on dangerously overloaded trains: "We'd rather run a short train than cancel it." Of course you would; the fewer carriages used, the fewer miles they clock up. The 'engineering wiki' is barely troubled and maintenance costs are cut. Either that or the maintenance is very poor and the extensive research conducted by the good people of the National Railway Awards failed to uncover that the maintenance is being conducted by one 'Wooky' apprentice, who can be paid under the minimum wage, with his wiki and a left-handed screwdriver.

But what I'm really interested to find is where are the missing carriages? Where is this this space, the size of Canada, where Southeastern is keeping them, because they sure aren't on the rails we use.

Posted by David Eckhoff at 11:57 No comments: