﻿ ﻿Every now and again Southeastern Railways holds a session where you can be dismissed as a worthless piece of paying flesh by much more senior personnel from Southeastern than you usually encounter. I attended two of these before I saw the light.
I have only ever called Southeastern customer services twice as it's like talking to a sponge. On one occasion I called to enquire as to why my train into work was late every day, sometimes by up to 40 minutes, or was simply cancelled. What I could not grasp was that mine wasn't the only train (if only it were, it would solve the London Bridge congestion issues) that was late, yet Southeastern's statistics indicated that it was some sort of European benchmark for punctuality. The person at the other end sympathised and said it was "probably due to congestion." He asked me to keep a diary of times my train arrived. I did that and it made for astounding reading, no matter which train I got it was always late into London.

So, one day I turned up at Cannon Street (late) and there was a Meet the Manager session. I wasn't planning to attend but my eyes met Mr Horton's and a woman at his side beckoned me over. I thought I'd tell him about the lateness issue and show him my diary. He cast barely a glance at it and muttered something about getting new equipment. I remarked that in 70s my old dad had said after a news item on British Rail that it could have everything replaced tomorrow and it would still be a disaster, and that despite my disrespect for anything my parents said then, I now realised he was absolutely right. I mentioned this to Mr Horton, and that I had seen new trains, new signals and new 'information' systems introduced since I started commuting and it was still terrible - and cripplingly over-priced. He said that his message to me and my dad was "it's very difficult running a railway," and then I was dismissed.

Two things wrong here: 1) run something else then, and 2) I'd need a medium to tell the old man that.

﻿ I know that anyone facing the public can have a tough job. I did it for many years as a complaints handler so I consider myself to have some expertise in this area. Situations like that pictured above are not pleasant for anybody. However, I was hoping that one of the Southeastern chaps pictured here was going to be in the firing line of the stomach contents of the gentleman who had been 'nicely irrigated with horizontal lubricant'.

Just a few nights before I had been trying to get to my train but, as happens frequently, the barriers would not recognise my season ticket. I asked the chap to help (he was talking to his railway mate) and he eventually came over. I said that I couldn't get in and he said that I'd broken the barrier. I thought he was joking and laughed politely but he insisted that I had broken the barrier, walked off and wouldn't let me in!

I said the obvious, I've got a valid season ticket, etc, but to no avail so I did what any 15-stones person would do and hurled myself at the barrier which did then give way. There was a lot of shouting and he walked after me for a bit but gave up about six carriages up the platform (not many Southeastern trains have more than six carriages).

I abhor physical violence and I hate it when I see people being abusive to Southeastern staff (yes, really) and I have even stopped someone acting like this (I'd had a few so I was being brave). But you have to wonder at the intentions of staff who deliberately antagonise passengers who then must walk past the posters warning them about not being abusive to railway staff. We should have our own posters.
Posted by David Eckhoff at 12:32 No comments:

Another day of railing

As I waffle away from my bloggery in Belgium, I have to say that I was impressed with Eurostar yesterday. The trains on the indicator boards existed, I didn't receive any messages saying that my train 'might' be cancelled or delayed and it answered my tweet about which services were running politely and directly. The Eurostar was about 30 mins late at Brussels because of speed restrictions (in France and Belgium) but we were advised of this before we left - but the fare was £59 return. £59! That's how much Southeastern would charge for a cup of tea, and then you wouldn't actually get the tea - but if you did it would be left to get cold and then poured over your head if you asked for it more than once because you didn't know what had happened to it.

But you'd really appreciate that cup of tea because it will be £75 next year in order to pay for 'improved' cold tea flung at you from a distance. And, of course, the Southeastern board would want a portion of the profit from your tea to take home in a big bundle once a year, as well as some for the shareholders. You get to keep the old tea bag. Enough about tea, let's hear from David about what's happening on the rails. 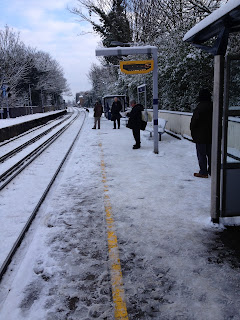 The platform at my station on 21 January 2013.  As you can see, the snow-clearing fairies never turned up here, maybe they were coming by train? Observe the indicator board, more (quite a lot more) of that in a minute.

A frank exchange of views 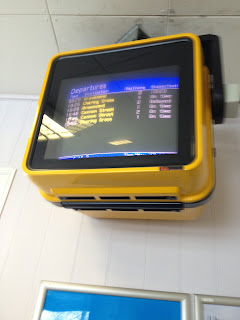 A short but hopefully not boring story of a typical exchange of views with a Southeastern Railway person, from 21 January 2013:
Announcement at station: “If you cross to the other platform you can get a train to Dartford and change, there are more trains going up to London from there via Woolwich Arsenal.”
My thoughts: “I’ll stay here thanks because the indicator board says there are three trains direct to London, albeit slightly delayed - coming soon! And Dartford is in the opposite direction.”
Narrative: I remain on the London platform along with about 30 other people. We discuss if this is a sort of Russian roulette: what if a train comes to other platform? Should we get that? Should we stay here? We decide to stay as a ‘selection pack’ of trains direct to London is indicated. Eventually, as the first train simply disappears from the indicator system, I go to the ticket office and ask for some advice on changing to the other platform (in railway terms you understand).
Ticket-office lady (ToL): “Those indicator boards are showing nonsense. I don’t even know if there are any trains to London.”
Me:  “Ah, right. Nobody realises that the indicator boards are wrong.”
ToL: “What do you expect me to do? I made an announcement.”
Me: “You could have said that the indicator boards were wrong so that people didn’t carry on waiting for trains that don’t exist.”
ToL: “See that screen up there? (points to screen pictured above) That’s wrong too.”
Narrative:  I notice that this other screen carries information that also conflicts with the one on the platform.
Me: “So why don’t you tell us?”
ToL: “I said that you might be able to a train quicker by going down to Dartford.”
Me: “But no-one is doing that because your info system is telling them they can get trains direct to London by staying where they are.”
Narrative: I wanted to say: "If you'd step out look at the station you appear to be responsible for you would see that no-one had moved, you would then realise the flaw in your plan." I couldn't say that though because it was so obvious it would have sounded rude.
ToL: “I can’t help that, I’ve been here since 5.45. I don’t know what you expect!”
Me: “Can I make the announcement for you?”
ToL: “I’ve been here since 5.45. Are you going to get on a Dartford train or what?”
Me: “Can you stop being so rude? I just want to get the train I pay for. All you had to do was say ‘ignore the indicator boards.’”
ToL: “You’re not at work at 5.45 every day are you?”
Me: “Ok, I’ll make the announcement.”
(Walks on to platform and shouts very loud)
“Excuse me! The indicator boards are showing utter bollocks. In actual fact the only option is to get a train to Dartford, if there is one. Apparently there are no London trains, so there’s no point waiting for one. ”
Narrative: About half the people cross over. The other half remain because they think I’m a shouty tramp, or they still trust the indicator boards more. A Dartford train comes in. I, and my new best friends, go to Dartford and eventually get a train from there to London via the scenic route, taking in Woolwich Dockyard, etc. 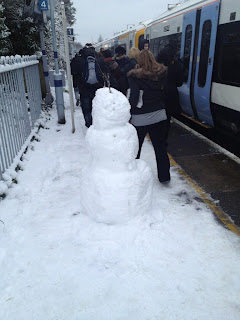 @cukie_juice posted this on twitter from her station. So fed up were passengers with the lack of information or any sort of concern at all from Southeastern or its representatives that they built their own station staff member. He (or she) has apparently been a vast improvement on the permanent staff, describing in detail what is not happening on the rails instead of shouting: "How am I supposed to know?" or just walking off without saying anything (mind you, he's got no legs). Unfortunately he/she can't hang about beyond February so responsibility for the station will revert to the current permanent staff.

Posted by David Eckhoff at 07:22 No comments:

British railways, probably the worst railways in the world

My journeys with Southeastern Railways, probably the worst of the British railways 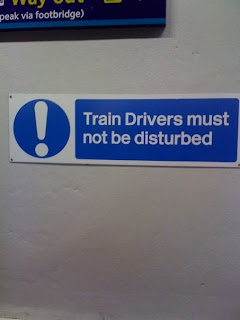 I'm a commuter, which means that I travel by train every day to and from work. It's a monstrously expensive journey, I pay around £1700 for an annual season ticket, and this rises by several times the rate of inflation every year. In return for these bladder-rupturing rises we're promised better trains, facilities and reliablity; none of these have ever materialised. One benefit of the delays was that it gave me more time to write my comedy-thriller The Royal Factor whilst commuting, and I have acknowledged my railway operator in the book for its contribution.

Many people hark back to the halcyon days of nationalised British Rail. However, this was awful too (and not just the 'Travellers Fare' terrible food part of the organisation). The culture of this nationalised 'business' has lived on but with a couple of further obstacles between getting passengers from A to B: shareholders expect a slice of our fares through dividends and railway company board members expect monster salaries and bonuses from our pockets. My railway operator is Southeastern Railways and we have developed a special relationship. I thought I'd post a few of my and other pictures to illustrate the issues.

By the way, what am I looking for from this? Southeastern is ludicrously expensive and it's rubbish: I would like to see fares reduced and the company made to get us from A to B reliably whether snowing, sunny, raining, windy or when there's a 'r' in the month. Er that's it...