Get those nuts checked!

I was having a slash last night and I saw the advert below over the urinal. It took me back to a time when I behaved like even more of an idiot than I do now. 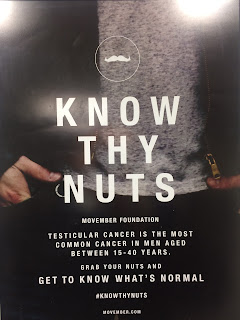 I knew I had a lump on the two veg. I knew it. But I couldn't face the embarrassment of having a doctor fiddling around with my tackle. It gnawed at me for months, especially as more publicity was being carried out around testicular cancer. I insisted that all the women close to me went and had their boobs manhandled, as it was vital anything untoward was caught early. Yet hid from them that I was such a Jessie that even though I knew I had a lump I was to prudish to have it seen to.

Anyway, I finally steeled myself after letting on to my girlfriend and letting her have a feel. In fact she made me go, I was still resistant.

At the time I was registered with Britain's rudest doctor. He only communicated with his receptionists through the medium of insults. He was just slightly better with patients. And he always had a box of Capstan Full Strength on his desk (he's dead now). 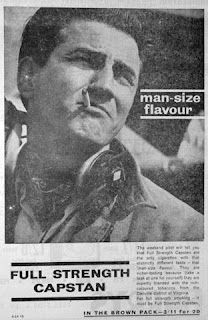 I told him about the lump and it was trousers down, pants off time.
"Jesus," he said. "I'm making you an appointment at Lewisham Hospital for today. Get down there and take your pyjamas with you."

I had never been so frightened in my life. And I refused.
"I haven't got any pyjamas," I said.
"It's your funeral," he replied.

I was genuinely terrified. But I did a deal with him and agreed an appointment in two days time at the Memorial Hospital at Shooters Hill with a "mate" of his. It was discussed in the same way as a builder might offer no VAT for cash.

So after much soul-searching I drove myself to the hospital as taking my own car meant I knew I had to drive myself home and wouldn't stay. Ridiculous.

I was called in to see Dr Capstan's chum and in an instant he had me up on a trolley, legs akimbo with his hands pulling my scrotum about as if it were a miniature bag of coal.

"Aha!" He exclaimed with too much delight, "Plenty of those walking the streets! Right, it's a benign cyst. I've got some students in and I want them to get an idea of what one of those feels like compared with something nasty."


Bloody hell! The relief! So I just said yes, as you would.


Then eight students turned up. Eight. Four girls, four boys. They literally formed an orderly queue and each had a feel. It was a bit awkward at first but by the sixth I was giving advice on where it was and would have given the cleaning staff a feel too had they popped in. I was impressed at how civilised, straight-faced and serious they were; eight students in their 20s.


So off they went, thanking me for eight quick fiddles, and I got dressed and got in my car. As I drove out of the hospital such was the relief I didn't see a zebra crossing. I screeched to a halt, half way across the zebra, as people were waiting to cross. Eight medical students to be precise, who all waved at me using the eight hands that had been wrapped around my testicles minutes earlier. As I drove off I saw them collapse into fits of giggles, which made me do the same!


So, if you're worried, your visit cannot be any more embarrassing than mine. So get them checked, or you'll be hearing from me...

Posted by David Eckhoff at 10:54 No comments: