Let loose down the shops


Yorkie came in in a bit of a panic, apparently Fergie had asked him to get a flunky to collect something from the shops, I'm not quite sure what it was but he said it would give her quite a buzz, maybe some Pro-Plus tablets. Anyway, it appears that the old girl said she was popping down the shops in Bromley so he asked her instead. Anyway, it seems that the royal correspondents got wind that she was up for some retail therapy and turned out in their droves. Yorkie did ask me to stop the pictures getting on to social media but I think I was too late. Got that bloody Gold woman on the phone now asking if she can have the 'By Royal Appointment' crest on her bunnies now...

Posted by David Eckhoff at 06:51 No comments:

Failure and triumph of the TA

My military career was short-lived, unlike my dad's, who rose from Private to Lieutenant Colonel over a 25-year army career. When I told him I was joining the TA he went on about the slaughter that had taken place, leading up to Dunkirk, of chaps who had "dressed up as soldiers at weekends and gone drinking." He wasn't being disrespectful of them, he was genuinely upset at the way their lives had been wasted by throwing them up against well-trained and battle-experienced German units, with their lack of training and terrible equipment, compared with that of the Wehrmacht.

I joined the TA in the 80s thinking I would run about creating havoc amongst the invading Russians. However, I accidentally joined the Royal Army Ordnance Corps, affectionately known as the Rag & Oil Brigade, which was actually responsible for stores.

The physical fitness test was running three miles in half an hour. I trained for this, it's not actually too hard. However, on the test day I found that you could stop for a 20-minute break and get a taxi to the finish line, such was the desperation to get people to join. So I got in and continued my two weeks of basic training.

As well as the odd physical activity, we had classroom lessons. One of these was a dose of propaganda, where we were told that if you look over the Berlin Wall, the Russian tanks you saw were made of cardboard. My dad told me that during the last war, soldiers were told that many German tanks were cardboard, he found out at Dunkirk that this was not the case. I pointed this out and the fact that we knew for certain that the Russians had thousands more real tanks than us, they would have more difficulty producing cardboard versions. The sergeant said that he was just told to tell us this and had no idea if it was actually true.

We had our passing out parade. I held the flag whilst my colleagues demonstrated their marching moves to a Brigadier as I could not march in a straight line, along with another chap who sobbed throughout the ceremony as he was also unable to march without embarrassing our colleagues. For me it was a triumph, for him it was a humiliation. We were given a lie to tell to the Brigadier to explain why we couldn't march, mine was a 'sprained ankle'. In the evening we had a curry laid on, which meant stripping one soldier naked and sticking chapatis to him with meat korma. Then it was weekend training. I was issued with a railway warrant to one place and directions to another, a TA tradition. The first weekend was camouflage. We were issued with green netting on the Friday night to find that it had snowed on the Saturday, so we were sent home. 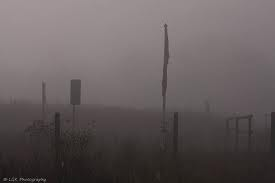 The next training weekend was on the ranges; unfortunately it was foggy so we couldn't see the targets - so we were sent home.

Another odd occurrence was when I and two other 'soldiers' were asked to meet two officers whilst we were in basic training. We assumed that it was to discuss insubordination as the three of us had been pulled up a number of times by some of the less humorous NCOs for ridiculing some of their more bizarre requests. However, we were asked if we would consider training and tests for a commission. All three of us agreed to this. But you won't be surprised to hear that that was the last we ever heard of it. And when we enquired about the situation we were told that such a discussion would never have taken place until we had served for three years...


I would have been in no position to threaten anyone with a weapon even whilst in the TA, let alone after, but I could have demonstrated how to store a number of different types of fire extinguishers. I resigned after one year, I would have been a liability. And I have encountered more organised herds of cats.


In the Royal Factor a group of soldiers features, which I always wanted to be a part of but it was not to be. I hope for the sake of soldiers, their families and all of us, that the TA, or Army Reserve, is better than this now.

Posted by David Eckhoff at 10:36 No comments: